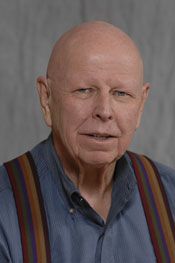 LINCOLN, NE (October 7, 2014) – Robert D. Kuzelka, who has spent most of his professional life educating others about groundwater and natural resources, has been selected to receive The Groundwater Foundation’s 2014 Maurice Kremer Groundwater Achievement Award. Kuzelka received his award on October 7, 2014 at The Groundwater Foundation’s National Forum in Las Vegas, Nevada. The Kremer Award was established in 1985 to recognize Nebraskans who have made a substantive contribution to the conservation and protection of Nebraska’s groundwater. Recent honorees include Ron Bishop, Dayle Williamson, Lee Orton and Mike Jess.

“Bob has been a consistent advocate for good things in Nebraska. He has always been a supporter for common sense relating to groundwater problems in Nebraska and is richly deserving of the Kremer Award,” said Kremer selection committee member and past Kremer award winner Jim Goeke.

Bob Kuzelka is an Associate Professor Emeritus in the School of Natural Resources at the University of Nebraska-Lincoln. As a full-time faculty member from 1979 to 2004, Kuzelka was affiliated with the Conservation and Survey Division; Department of Community and Regional Planning; Department of Forestry, Fisheries and Wildlife; University of Nebraska Water Center; and School of Natural Resources. From 2001 through 2008 he served as the director of UNL’s interdisciplinary Environmental Studies program. Kuzelka has co-authored two state water policy issue studies, developed handbooks on groundwater management planning for quantity and quality, and served as co-editor of The Groundwater Atlas of Nebraska and Nitrate Contamination/Exposure, Consequence, and Control. During his time at Conservation and Survey, Kuzelka served as project manager and contributing author for Flat Water: A History of Nebraska and it Water. Through all of these actions and more, Kuzelka has ensured that Nebraskan’s have knowledge of the groundwater that nourishes them.

“I am proud to say that I introduced Bob Kuzelka to Susan Seacrest. Through their efforts the Groundwater Guardian program came into being and became the great success that it is today,” Goeke said.