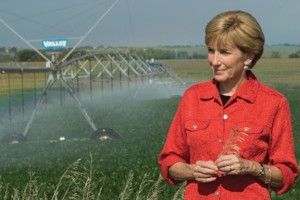 LINCOLN, NE (October 1, 2015) – Susan Seacrest, who began The Groundwater Foundation out of her kitchen in 1985 and grew it to a nationally-recognized voice for groundwater education and citizen involvement, has been selected as the 2015 recipient of the Maurice Kremer Groundwater Achievement Award.

Seacrest will be presented the award as part of The Groundwater Foundation’s 2015 National Conference, held October 20-22, 2015 in Lincoln, Nebraska. The Kremer Award was established in 1985 to recognize Nebraskans who have made a substantive contribution to the conservation and protection of Nebraska’s groundwater. Recent honorees include Bob Kuzelka, Ron Bishop, Dayle Williamson, Lee Orton and Mike Jess.

“Each year it is a great honor to present the Maurice Kremer award,” said Groundwater Foundation President Jane Griffin. “This year it is even more special to award it to Susan Seacrest, founder and first president of the Groundwater Foundation. Susan has had an enormous impact on groundwater awareness, protection and conservation for 30 years, and her impact will continue for many more decades.”

Seacrest founded The Groundwater Foundation in 1985 and served as its President until retiring in 2007. During her tenure at the Foundation, she developed educational programs, such as the Children’s Groundwater Festival and community recognition for groundwater protection, Groundwater Guardian.

“The selection of Susan Seacrest as the recipient of the 2015 Maurice Kremer Groundwater Achievement Award recognizes Susan’s tremendous contributions to the conservation and protection of Nebraska’s groundwater resources,” said selection committee member Don Kraus of the Central Nebraska Public Power and Irrigation District in Holdrege, Nebraska. “As the founder of The Groundwater Foundation, her efforts to educate and motivate the public have inspired action to ensure sustainable, clean groundwater supplies across the state, the nation and the world.”

As a result of her work on behalf of groundwater, Seacrest was featured as a Hero for the Planet by Time magazine, and awarded the John Wesley Powell Award from the U.S. Geological Survey and The Heinz Environmental Award from The Heinz Family Philanthropies.

In 2008, Seacrest continued her educational career at North Star High School in Lincoln, Nebraska, where she focused on working with Lincoln’s immigrant and refugee families. Seacrest retired from the Lincoln Public Schools in 2014, and was part of the planning committee for the National Science Olympiad Tournament held at the University of Nebraska in May 2015.

“Susan’s initial conception for The Groundwater Foundation was that the basis for its educational programs was to be sound science,” said 2014 Kremer honoree and selection committee member Bob Kuzelka. “This information base line made the Foundation a greater scientific organization than many of its educational and scientific peers.”

“She would be the last to say it, but truthfully there is no recipient more appropriate than Susan to receive the award this year, The Groundwater Foundation's 30th anniversary!” Griffin said.

Jim Goeke, selection committee member and 2001 Kremer Award winner, echoed these thoughts. “Susan Seacrest is the quintessential recipient of the Kremer Award. Were it not for her creative genius, energy, and vision, there would be no Groundwater Foundation. It is entirely appropriate to recognize her on the 30th anniversary of the organization she founded with The Groundwater Foundation’s highest award.”