Saving Money and the Water Table 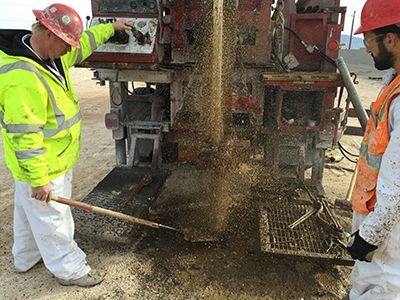 When the Assistant Management Analyst of the Southern Nevada Water Authority talks about the conversion process from domestic wells to the municipal water supply, she doesn’t mince words. By connecting to the municipal water system and properly sealing the abandoned well, citizens prevent water contamination via a direct conduit into the Las Vegas Valley’s primary water supply.

“It’s a very expensive procedure,” Natalia Londono-Arroyo explains.  “From plugging the well to pipe construction to the water line, it can easily become $25,000 out of someone’s pocket.”  These costs can be very off-putting for otherwise well-intentioned, environmentally-conscious residents. For the past 16 years, however, the Las Vegas Valley Groundwater Guardian (GG) team has been battling conversion costs with the Well Conversion Grant Program (WCGP), a financial incentive that pays up to 85 percent of the total fee. This program is funded by all groundwater rights holders and domestic well owners through an additional charge on groundwater users’ annual fees. Additionally, the GG team offers a program that will plug abandoned and unused wells free of charge.

Groundwater management hasn’t always been Nevada’s highest priority.  The Las Vegas Valley basin has been overused since the late 1940s and, with a population of two million and counting, the overdrawn groundwater had been the cause of several well failures and increased pumping costs.  The Nevada legislature recognized the need to give invested parties, including residents and local businesses, a place to voice concerns, become informed, and make and receive recommendations on how to use and protect their groundwater resources.  The Southern Nevada Water Authority (SNWA) was authorized to fulfill this role in 1997 and later developed the Groundwater Management Program, as well as the Advisory Committee for Groundwater Management, which in turn became the GG team as it is today. The committee is currently made up of seven voting community members and two advisory members: the Nevada State Engineer and the administrator of the Nevada Division of Environmental Protection.  Using readily available materials provided by The Groundwater Foundation to its GG teams, Natalia and the advisory committee aim to educate community leaders about water conservation and contamination issues. 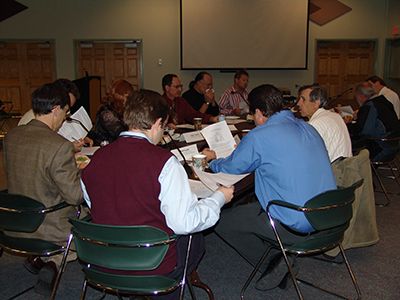 A meeting of the Advisory Committee for Groundwater Management, which functions as Las Vegas Valley's Groundwater Guardian team. The committee meets annually to discuss options and make recommendations regarding groundwater management.

Formally, the advisory committee meets annually to discuss options and make important recommendations to the SNWA regarding management strategies surrounding the Las Vegas Valley Groundwater Basin.  Holding an annual public workshop, distributing two newsletters to more than 8,000 well users in the city and surrounding area, and maintaining an informative website are just some of the ways the Groundwater Management Program and GG team reach out to constituents.  By bringing in outside environmental agencies and materials, the team invites people from diverse economic, social, and political backgrounds to openly discuss their shared groundwater resource.

The best and perhaps most surprising aspect of this community is its genuine connectivity.  It can be difficult to balance the needs of individual users against the long-term health of the aquifer but, from workshop to sidewalk, the people of the Las Vegas Valley generally acknowledge the dangers of leaving abandoned wells unplugged. Community members talk to and encourage each other to take advantage of the WCGP, resulting in a staggering 98 percent of participants voluntarily converting to the municipal water system.  Neighborhoods and school systems value conservation education, and students are instructed in matters of natural science, water systems, and the aquifer above which they live.  The water table is higher and more stable than it has been in more than a quarter century and this was cultivated in part by the distribution of resources from the GG team into the hands of the concerned citizens Las Vegas Valley.