An Unconventional Path to Groundwater Education 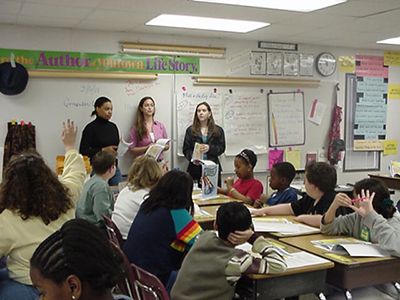 Lisa Corbitt’s background in hydrogeology was a very natural starting place to her involvement with The Groundwater Foundation (GF) and the Groundwater Guardian (GG) program, but that’s about the only traditional part of her path in nearly 18 years of involvement.

When she attended the GG conference in Chicago in 1996, Corbitt was introduced to a network of people committed to bring groundwater issues into the national spotlight. She recognized that much of the work that the Groundwater Program in Charlotte, North Carolina was doing made it applicable for a GG designation and the board felt the same way.

In 1998, the Mecklenburg County Groundwater Program became a GG Affiliate, giving them the opportunity to identify the groundwater needs of the county and encourage GG membership. Mint Hill became the first officially designated GG team in 1999, having established Aquifer Clubs at local elementary schools that were led by invested high school students and held the first Mint Hill Groundwater Festival with community support. In 2000, Mecklenburg County welcomed two more GG teams in the neighboring communities of Steele Creek and Lake Norman. Together, the teams conducted additional Water Festivals, established an Environmental Leadership Workshop for high school students, and expanded the Aquifer Clubs to a charter school and a low-income afterschool program. Around 2004, the GG teams and GG Affiliate jointly published an activity book titled “Drippy’s Aquifer Adventure”, a story that took students on an adventure through the North Carolina’s groundwater system. Over 200 public, private, and homeschooled students received this book as participants in the Aquifer Clubs and Water Festivals.

In 2004, however, the NC Learn and Serve Grant, which supported the multifaceted activities, was not funded, inhibiting the GG teams’ ability to run their programs. The Aquifer Clubs suffered when school boards ruled that high schoolers driving themselves to attend meetings held at the elementary schools were a liability and should be disallowed. While “Drippy’s Aquifer Adventure” continued to be handed out at community festivals and the Mecklenburg County Groundwater Program established a stakeholder group to investigate the need for local groundwater well regulations the teams lost focus without the central educational outreach of the Aquifer clubs and Water Festivals. Several GG sparkplugs moved on to other jobs and the teams were struggling to continue. 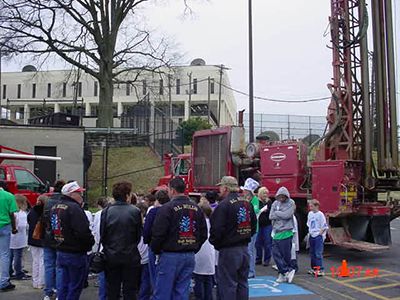 Mecklenburg County partners with a variety of organizations to share groundwater education in well contractor trainings, outreach to realtors and teachers, and hands-on events like Science Olympiad.

Since 2005, the Mecklenburg GG team has been active in well contractor training, educational outreach to realtors and teachers, and hands-on education events like Science Olympiad. The GG Affiliate continues to support the community and represents the GF and Mecklenburg County as a member of the North Carolina Source Water Collaborative, a partnership of state and local agencies, nonprofits, and universities to protect drinking water in North Carolina. Corbitt’s previous engagement in youth programming and legislative advice, has had a huge impact on the improvement of community water issues but, Corbitt admits, it is sometimes hard to reach the individual homeowners in Charlotte and the six surrounding towns. She has since come to rely on the regular trainings and information provided to realtors at the Mecklenburg County Realtor Expo. Realtors pass on groundwater conservation and protection knowledge to their clients and regularly connect with her team for additional materials, ensuring that the team’s message is heard by all potential stakeholders.

Corbitt is proudest of Mecklenburg’s flexibility. When money dries up and people leave or materials no longer have the desired effect, Corbitt’s team sees these setbacks as opportunities to re-evaluate themselves. She really believes in the purpose of the GF, saying:

“So often, conservation messages are lost in the jargon. The GG program prepares us to be out in the community, educating people in a relatable, understandable way. The message is timeless. Our path has only been changed by the way we present it.”